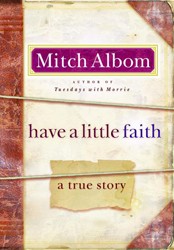 Have a Lit­tle Faith: A True Story

Have a Lit­tle Faith: A True Story

Mitch Albom
By
Libi Adler Michelson
– August 24, 2011
Most read­ers of Mitch Albom’s pre­vi­ous books know that he has a way with words. His sto­ries can rise from the pages and into your imag­i­na­tion, plac­ing you in the moment with his char­ac­ters. Albom has done it again in this lat­est work about two cler­gy­men, each of whom left a sig­nif­i­cant mark on their com­mu­ni­ties.

Meet Albert Lewis, ​“The Reb.” The Reb was hired to be the rab­bi in Albom’s home­town syn­a­gogue straight from sem­i­nary and stayed for the rest of his career. He cre­at­ed a Jew­ish com­mu­ni­ty based in a small, ren­o­vat­ed house, befriend­ed the locals, con­vinced the neigh­bor­hood that Jews belonged there too, and made sure that he was approach­able to every per­son in his com­mu­ni­ty. Albom moves away to Detroit, becomes a big hit in the writ­ing com­mu­ni­ty, and all but for­gets his old rab­bi. That is, until the Reb approach­es Albom with an unusu­al request: ​“Will you do my eulo­gy?” Albom’s ini­tial reac­tion is to run away and hide, but he even­tu­al­ly agrees to take on this request and starts to vis­it the Reb and talk to him to get an idea of who this man he once revered and feared real­ly is.

Mean­while, in Detroit, Albom meets Hen­ry Cov­ing­ton, a reformed drug addict and crim­i­nal who is now the pas­tor at I Am My Brother’s Keep­er church. Albom and Hen­ry (coin­ci­den­tal­ly, also called the Reb by his fol­low­ers) form a rela­tion­ship, one that begins with skep­ti­cism on Albom’s part, but grows to be one of mutu­al respect and ado­ra­tion. Both the Reb and Hen­ry teach Albom about God and faith. They show that life isn’t always easy, proven by the many hard­ships they have endured over the years, but that in the end there is always ​“some­one” watch­ing over us.

Writ­ing with intense emo­tion and hon­esty, Albom includes old ser­mons writ­ten by the Reb and the eulo­gy that, after eight years of meet­ing, he sad­ly had to write. At one point, Albom asks the Reb if he thinks that they will meet again one day, see­ing as how they will prob­a­bly go to dif­fer­ent lev­els of heav­en. ​“Why do you say that?” the Reb asks. ​“Because you’re a man of God” Albom replies. The Reb’s eyes tear up: ​“You’re a man of God, too. Every­one is.”

Libi Adler: Why do you think the Reb picked you to write his eulo­gy?
Mitch Albom: I don’t real­ly know. I won­dered it from the start, I won­der it still. He once said to me that he thought it would be appro­pri­ate for a mem­ber of a con­gre­ga­tion to speak when a cler­gy­man dies because that was one way to mea­sure their effec­tive­ness [in the com­mu­ni­ty]. If he real­ly devot­ed his life’s work to a con­gre­ga­tion, then hav­ing a mem­ber of his own fam­i­ly or anoth­er cler­ic talk about him wouldn’t nec­es­sar­i­ly reflect the work he had done and the lives he touched. So I think a part of him want­ed a mem­ber of the cheap seats [to deliv­er his eulo­gy]. I also have my own sus­pi­cions that he sort of knew that by ask­ing me to do it he would draw me back and lure me in, expose me to Judaism and Jew­ish edu­ca­tion, more of what I grew up with, and he did. It end­ed up being like an eight year adult edu­ca­tion class.

LA: Do you think that if some­one else would have approached you with the same ques­tion that you would have done it?
MA: Prob­a­bly not. No one has ever asked this of me before or since. It was all I could do. It was only because I couldn’t say no to him, because I was so afraid of him, that I said yes in the first place. I can’t think of any­one else that I would have felt wor­thy of doing it.

LA: Do you think that this did bring you clos­er to Judaism? Do you think he achieved his goal of con­nect­ing you?
MA: Oh yes, I think it did, no doubt. As I say in the book, he would talk about our beau­ti­ful faith. He would always say that over and over again: this is us, this is our beau­ti­ful faith. I think in the begin­ning I felt like it was just a recruit­ing pitch, but I think over time I came to not only agree with him but also to lose some of the embar­rass­ment. Embar­rass­ment, or shame, about talk­ing about my reli­gion, not want­i­ng too many peo­ple to know about it. But watch­ing him and how proud he was, I real­ized he was more right than I was, I shouldn’t have been that way. I don’t feel that way as much any­more.

LA: Is there some­thing that was your best or biggest les­son you learned from the Reb from this expe­ri­ence?
MA: There were prob­a­bly two. One was when we were talk­ing about hap­pi­ness and he told me the sto­ry about babies hav­ing their fist clenched when they come into the world because they think they can take every­thing, but when we die our hands are wide open. I remem­ber that he showed me his hand while he was in this hos­pi­tal bed and he said it’s because when we die you can take noth­ing with you. That real­ly res­onates with me, because we do spend a lot of time try­ing to achieve and buy things and accu­mu­late things, and I cer­tain­ly have done that. When I saw him all by him­self in that bed with his hand open, I real­ized he’s right, there isn’t any­thing you can take from this life except maybe faith, which doesn’t fit in your hand. The sec­ond time was towards the end, when he said that he hoped that I would live many more years, so that when I got to heav­en we would have a lot to talk about, and I asked if he real­ly thought we were going to see each again. He said, ​“Oh yeah, don’t you?” and I said ​“I don’t think I’m going to the same place as you’re going…you’re on a dif­fer­ent lev­el, you’re a man of God.” And he replied, ​“Well you’re a man of God too, every­body is.”

That real­ly stuck with me, because I felt that that was a very impor­tant part of the book both for me, and also for the peo­ple read­ing it. Every­one real­ly is a man of God or a child of God, and there isn’t that much of a dis­tance between a cler­gy­man and you or me, in terms of the eyes of God.

LA: It’s fun­ny that you men­tioned that, because it real­ly did res­onate with me and when I reviewed the book, it was one of the lines that I put in the review. I thought that that was an over­ar­ch­ing theme that I got from the book, per­son­al­ly. I found that there are a lot of sim­i­lar­i­ties between this book and your pre­vi­ous books: men­tors, heav­en, life lessons. Is there some­thing unique that you’ve pulled from each one that doesn’t con­nect between the oth­ers?
MA: I’d like to think that they are all unique. Five Peo­ple You Meet in Heav­en is a total­ly dif­fer­ent read­ing expe­ri­ence than Tues­days With Mor­rie. One is true, the oth­er is fic­tion. One is very small sto­ry about a guy and old man talk­ing, the oth­er is a huge fairy tale about five dif­fer­ent heav­ens and an amuse­ment park.

But what they do have in com­mon is ques­tions. Ques­tions about what we are here for, the pur­pose of things, the pur­pose of rela­tion­ships with oth­er peo­ple. Where do we fit into the grand scheme of hav­ing some kind of sig­nif­i­cance, some mean­ing to our lives?

LA: Do you see your­self writ­ing anoth­er work of this sort, fic­tion or non­fic­tion?
MA: I guess even­tu­al­ly, but I have no plans, and I’m not one of these writ­ers on a sched­ule. I have no clock by which I have to oper­ate, that’s why there are years in between. I just wait until some­thing moves me enough that I’m think­ing about it all the time and then I think that it has some res­o­nance for oth­er peo­ple. When I’m onto some­thing that I think oth­er peo­ple are also ask­ing them­selves about, then I get moti­vat­ed. But where that’s going to come from, I don’t know.

LA: Final­ly, Is there one ques­tion you wish peo­ple would ask you about the book, some­thing no one asked?
MA: Maybe, about the lit­tle girl at the end of the book. It’s one of my favorite moments in the book. Her father was a home­less guy who Pas­tor Hen­ry gave a chance; he let him sleep in his house. The girl’s moth­er was a bat­tered woman who came to the church, seek­ing help, and the two end­ed up meet­ing and get­ting mar­ried and had this beau­ti­ful kid, even though the doc­tors told her she wouldn’t sur­vive. And now she’s a doll of a kid, and she’s there all the time, and she owns the church, runs all around as if it’s her own. I like talk­ing about her because she is the future. She hugs me when­ev­er she sees me. She doesn’t think about me being Jew­ish and her being Chris­t­ian, whether I’m white and she’s black, noth­ing. That pure kind of love that can come when you are raised with a sense of fam­i­ly and a sense of faith. I wish I could take her on the road with me.
Libi is a first-time mom liv­ing in New Jer­sey. She works in fundrais­ing and events at Yeshi­va Uni­ver­si­ty and is pur­su­ing a master’s degree in Marketing.
More from Libi Adler Michelson 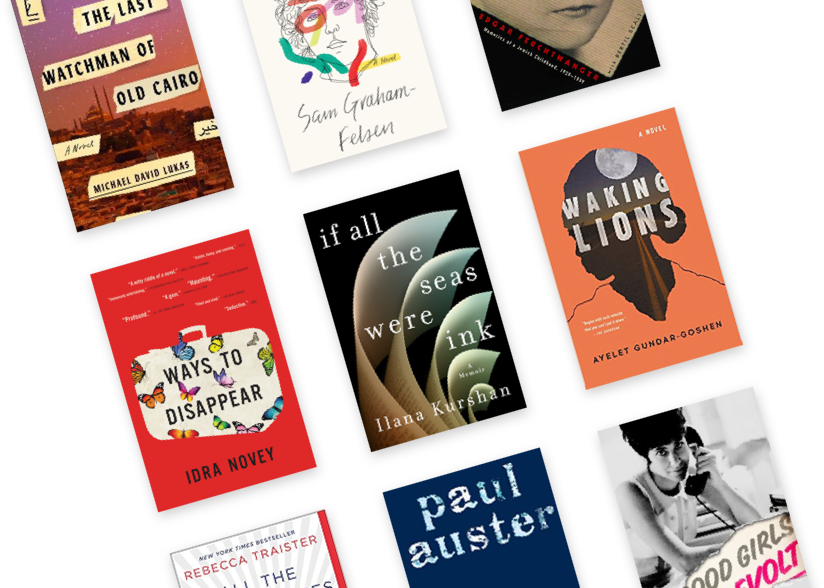 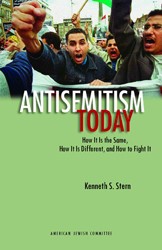 Non­fic­tion
Anti-Semi­tism Today: How It Is The Same, How It Is Dif­fer­ent, and How To Fight It
Kenneth S. Stern 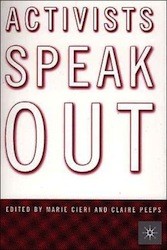 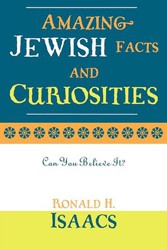 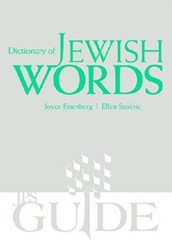